Our inaugural Time Machine summit is officially over, and it was definitely one for the books! Over 300 attendees joined us for two days in Austin to hear from leaders in a variety of industries: oil and gas, academia, aviation, finance, and defense, just to name a few.

Couldn’t make it to the summit, or just want to re-live the fun? Here’s a rundown of the second day of Time Machine. (Catch up on the first day here.)

Dr. Bruce Porter kicked off the second day of Time Machine with a brief overview of the history of AI, which was first defined in 1955. He pointed out that early AI researchers were psychologists at heart—trying to use computers to understand cognition. Today’s systems are “idiot savants” that excel at solving a specific problem (usually using correlation), but can miss constraints that are obvious to a human (for example, if bleach and milk were accidentally combined, AI might say the mixture would be safe to drink after removing the bleach). Finally, he looked to the future of long-term AI that is constantly learning, and the promises it might bring.

Following Dr. Porter was Dr. Peter Stone of UT Austin, who specializes in robotics. Dr. Stone showed several examples of his work with the champion robot soccer team. In his search to build a complete agent that can improve with experience and interact with other agents, he has gained insight into reinforcement learning, such as how the many robots roaming through the halls of his lab have learned to respond to different variations of “take me to Peter’s office.” He also stressed that AI is not just one thing, and will require different regulations for each field of use.

Next, Soma Somasundaram of Dover Energy took the stage to discuss IIoT, declaring that “IIoT enabled by AI is arguably the most important future technology.” He pointed out that AI benefits from human input and ability to dream, and this collaborative intelligence can lead to “extraordinary possibilities” like allowing a well engineer to optimize an entire well site, not just individual processes.

“Technically funny” Don McMillan, an engineer-turned-comic, provided a bit of comedy relief, with a PowerPoint explaining the difference between geeks, nerds, and big nerds. He took the stage again later in the afternoon to cast “Time Machine: The Movie,” starring Demi Moore as Wendy Anderson, Elijah Wood as Usman Shuja, and of course, George Clooney as Amir Husain.

SparkCognition’s Usman Shuja moderated a panel on AI in IIoT, with Andy Timm of PTC, John Mansfield of GE Aviation, and Mobeen Khan of AT&T lending their thoughts to how the new technology created immense opportunity—with thoughtful adoption. They discussed challenges like what to do with all the data collected (Mansfield pointed out that an airplane has 25,000 sensors with 45 TB of data!) and how to get access to the right data to make an impact. Heads nodded as Khan said, “You can build the right systems, but unless you change the way you work, it won’t be useful.”

After a filling barbecue lunch (we had to show our guests the best of Texas!) and Amir providing a glimpse from his book, it was time for another panel. John King, SparkCognition’s director of marketing and emcee of Time Machine, sat down with Steve Nordlund of Boeing HorizonX, Vijay Doradla of Verizon, and Joshua Baer of Capital Factory to discuss investing in AI. Vijay made us blush when asked about the biggest challenges to AI investment, saying the field struggles with “how to filter the signal from the noise—I got lucky and can use SparkCognition as a reference point for other investments.” (Baer nodded along, noting AI was one of the most common pitches.) Nordlund also announced an exciting partnership with SparkCognition, with codevelopment capabilities.

Next, Moiz Kohari from State Street took the stage to talk about AI in finance. After stating, “Data is the most important commodity we have,” he addressed how siloed data can lead to inefficiencies and time and money spent reconciling. He spoke of the desire to have a single book of record—with comments layered in—as a single source of truth for the company, banks, and regulators. In addition to operational efficiencies gained, he’s also looking to predictive analytics for the purposes of future performance.

technology is AI capable of designing AI systems, replicating the mind of a data scientist by automating the cleaning of data, pattern discovery, and creation of an optimal model to solve the given problem. Darwin

uses a patented combination of genetic and deep learning approaches to converge to a generalized solution for supervised, unsupervised, and reinforcement learning problems. We are so excited for this new addition to our product lineup, which will be available early next year.

We had a great time geeking out over AI with everyone at Time Machine 2017. Thank you to all our speakers and guests for participating in our summit, and let’s start the countdown to Time Machine 2018! 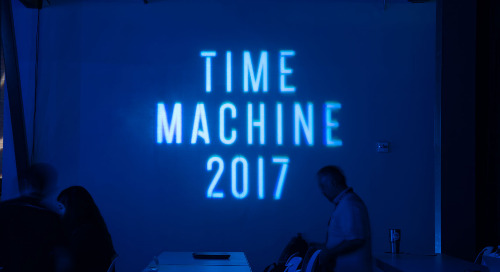 At SparkCognition’s Time Machine conference, industry leaders from a variety of fields gathered to share in... 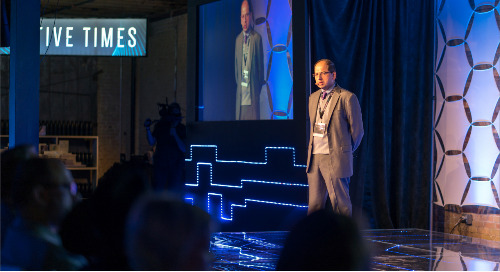 The first day of Time Machine, SparkCognition’s inaugural summit on AI, has come to a close. Today, we were...